The Lost Tribes of New York City from Carolyn London on Vimeo.

The lost tribes of New York City is a lovely film created by Andy and Carolyn London. By making objects on the street (such as public phone, sewer lid and hydrant) come alive, and using the voice from interviewing different races of people in NYC, this animation shows different perspective of the city.

SURFACE : A film from underneath from TU+ on Vimeo.
Another film I choose for this topic is about the perspective underneath. It's very fun that you never think about how things look like from the perspective you are not used to, especially the city itself. "Surface" is actually from a thesis project "UND-VIS"(Underground Vision Experiments) of a Parsons MFA student Varathit Uthaisri. The project is about to explore the unique vision from underground. 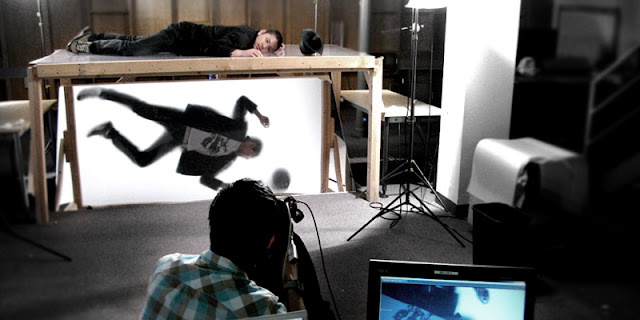 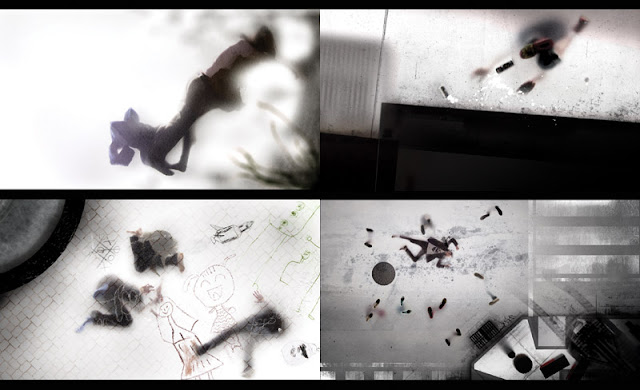 All pictures from SURFACE: An Experimental Film from Underneath.
Posted by Camile at 3:33 AM 3 comments: 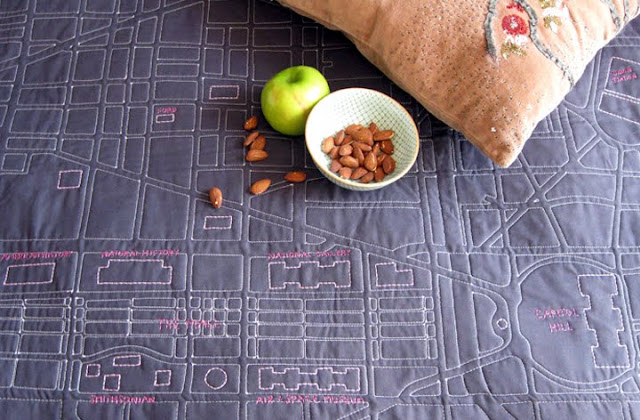 Haptic Lab brings us these AMAZING quilted city maps - quite possibly the best way to interact with a map ever! 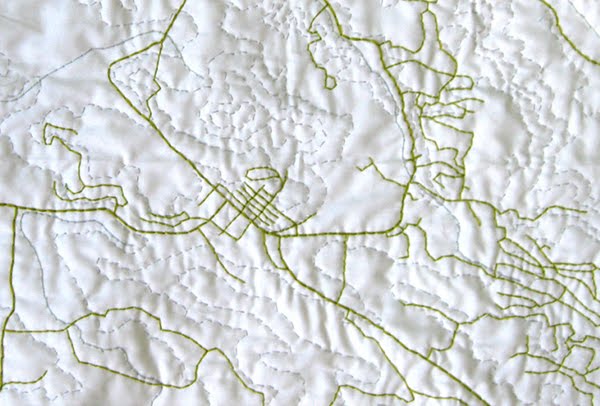 Haptic Lab was started by Emily Fischer, a Brooklyn-based architect and designer. Soft-Maps started in 2002 as an academic experiment in tactile wayfinding; the quilts were inspired by Emily’s mother Peggy who had begun losing her eyesight.

The website has quilts, baby SoftMaps and even custom maps available. I am dying to own one of these someday!! If you join the mailing list you can be entered to win a free quilt :)

What a great way to reimagine a city.

Map and topography pillows can be found here.
CityFabric where you can get awesome maps on shirts and canvases. 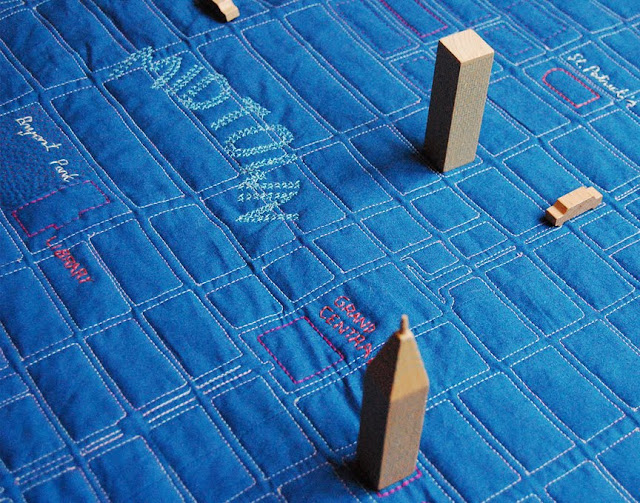 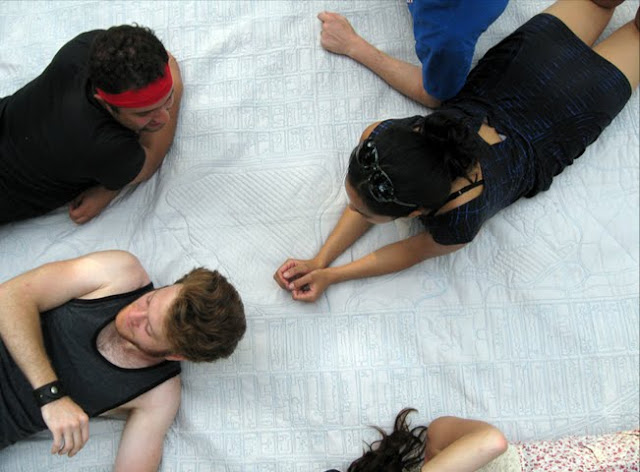 "Fifty People One Question" is a series of films created by Benjamin Reece of Deltree and Nathan Heleine of Crush+Lovely. By asking one question, such as "Before the end of today, what would you wish to happend?", fifty people need to think of their own answers to the camera. This experiment exploring the connections through people and places, and discovering dreams, losses, stories and secret from person to person.

This is one of the films that took place in Brooklyn, NY, and the question was:
Where would you wish to wake up tomorrow?

Another interesting question was:
"what's your secret?"
When asked by this question, most people felt shy and might be a little bit embarrassed to answer. Surprisingly there were still lots of people being opened to the question and tell the truth, and it was kind of fun that we can share our little secrets with strangers on the internet.


PostSecret: Confessions on Life, Death and God from Frank Warren on Vimeo.
Posted by Camile at 12:56 AM 1 comment:

Slinkachu is a UK based artist who does these great installations of miniature model train characters around London.

He says: "My 'Little People Project' started in 2006. It involves the remodelling and painting of miniature model train set characters, which I then place and leave on the street. It is both a street art installation project and a photography project. The street-based side of my work plays with the notion of surprise and I aim to encourage city-dwellers to be more aware of their surroundings. The scenes I set up, more evident through the photography, and the titles I give these scenes aim to reflect the loneliness and melancholy of living in a big city, almost being lost and overwhelmed. But underneath this, there is always some humor. I want people to be able to empathize with the tiny people in my works."

Check out more of his works on his blog or see all of his work/exhibits/books etc on his website. 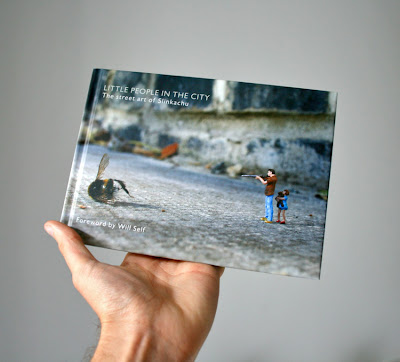 Buy his book Little People in the City: The Street Art of Slinkachu here - its great...and another must have for coffee table browsing. Again...I have this book and can definitely recommend it!

Another of my favorite artists working with mini people is Vincent Bousserez. He's an all around amazing photographer but his miniatures are spectacular! He has them all posted to his Flickr account here and here. And here is a great article on his work in My Modern Met. Below are two of my absolute most favorites!! 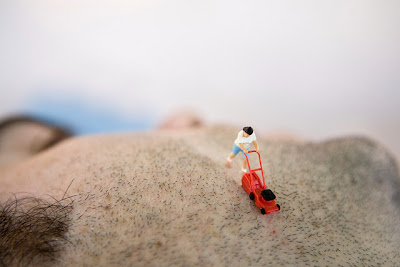 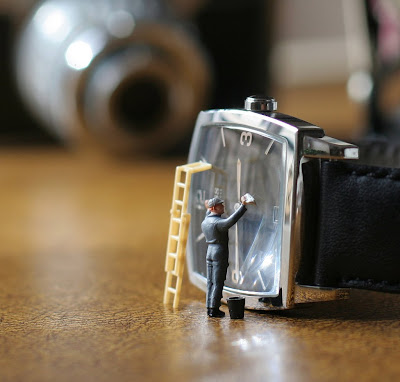 Photos from Vincent Bousserez's Flickr stream.
Posted by Lauren at 1:20 AM 2 comments:

Have you ever seen a museum without an address? The Homeless Museum(or “HoMu”), a compact stand around Chelsea, equipped with sculptures and a microphone stand, is the weirdest and smallest museum on the street. The artist Filip Moterdaeme first opened “HoMu” at his Brooklyn apartment in 2003. Let’s take a look of this place: 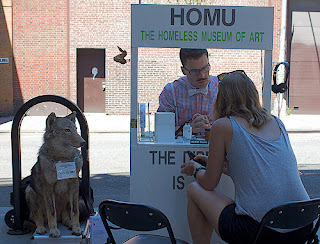 Moterdaeme actually lived in the museum himself. Since its inception in 2002, it has at turns been a live-in museum in a rental apartment in Brooklyn, an activist's initiative, an exhibit in a vacant artist studio, a collection of original artworks, and a mock museum booth embedded in a commercial art fair. Juggling irreverence and sincerity, HoMu seeks to subvert the increasingly impersonal, market-driven art world and expose the sellout of cultural institutions to commerce, cronyism, real estate, and star architects. HoMu exists in a state of perpetual flux and continues to defy the rules of the established art world. 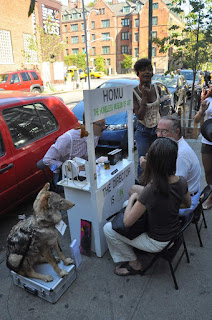 From Moterdaeme's ironic humor, MoMu has been controversial but also very attractive to the public. By using satire, he successfully and creatively represents his view of the relationship between artists and the museum: If the artists cannot have their work in the museum, then create a museum of their own! A pamphlet at his museum-stand says:
“My museum is small and admits only two visitors at a time, but it holds all the vital elements of a contemporary art museum–minus the shop and cafe. The HOMU booth is ticket counter, information desk, exhibition hall, press department and director’s office, all in one…”
Extended reading:
http://nonewenemies.net/2010/10/28/homeless-museum/
Website of HoMu:
http://www.homelessmuseum.org/ 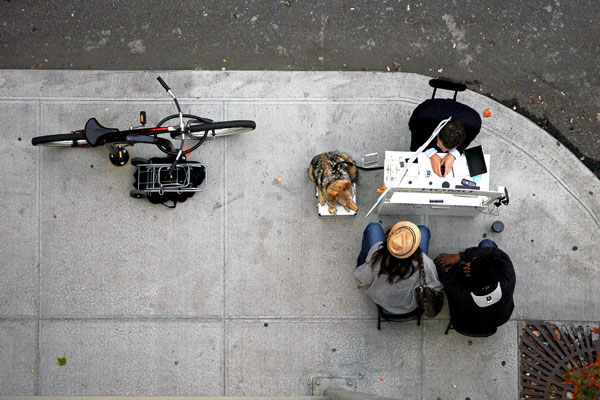 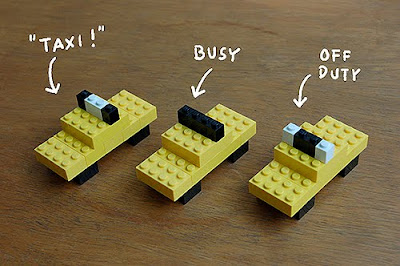 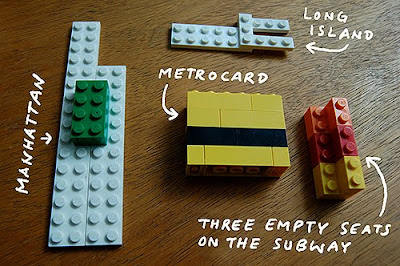 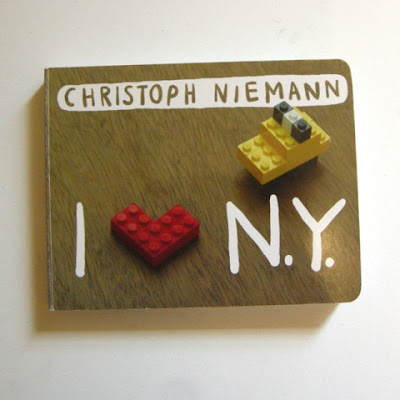 Brought to you by designer and illustrator Christoph Niemann "I LEGO N.Y." is an endearing little book that shows bits and pieces of New York rendered with legos. Yep, its as good as it sounds. From taxis to wasabi, the Holland Tunnel to a stack of $20 bills, all are made from Legos and completely adorable. This book makes an excellent coffee table book ( I can attest to this because it currently is sitting on my coffee table)

This video is pretty ridiculous but shows a lot of the book with a catchy little tune :) 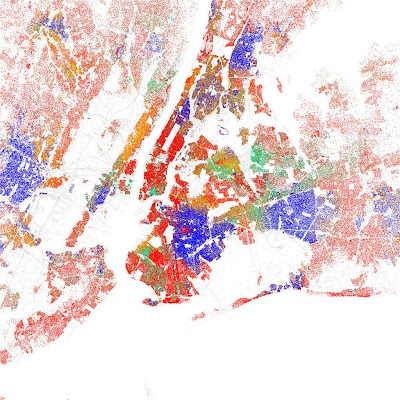 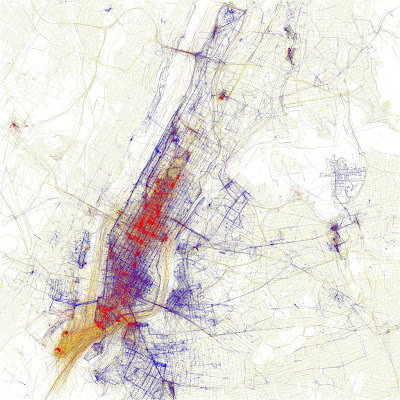 Eric Fischer has beautifully mapped hundreds of cities. He mapped racial and ethnic divisions in over 100 US cities based on the 2010 census results. These maps reveal such an interesting natural of cities. Some are pretty homogeneous while in others, strict divisions are visible. New York City's map to the left is so interesting to me - you can see Chinatown in downtown Manhattan - and its got a great mix of all different ethnicities. The key for the maps is red is white, blue is black, green is asian, orange is hispanic, yellow is other, and each dot is 25 residents. His whole collection of Race and Ethnicity Mappings is available on his Flickr stream. I think one of the most interesting maps is Detroit - the division from one side to the other around 8 Mile Rd (think Eminem) is pretty intense.

Another of his projects is Locals and Tourists where he mapped photo locations based on geotagging from public Flickr and Picasa search APIs. The photos are then colored coded as locals, tourists or unknown. Multiple photos in the same city over a period longer than a month classified the photographer as local. Its interesting to see the series (130 cities sorted by highest number of local photos) because it shows which cities really are mostly just tourism focused, and which cities have photos by locals too. London is at the top of the list for photos by locals, followed by NYC, San Franciso and Paris.

This project is a derivative of his Geotaggers World Atlas project - which is, of course, also awesome :)

Some things this theme has covered so far